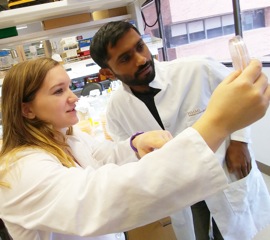 Many colleges and universities now promote undergraduate research opportunities, but they are, too often, offered to a select few. While juniors and seniors pursing STEM degrees might, in small numbers, benefit from this enriched form of learning, most students enrolled in lower division science courses still encounter conventional 100-level lecture and lab classes.

Since 2008, however, the Howard Hughes Medical Institute (HHMI) in Chevy Chase, Maryland has pioneered an innovative biology curriculum that makes original research the centerpiece of even introductory biology courses. Called SEA-PHAGES (Science Education Alliance-Phage Hunters Advancing Genomics and Evolutionary Science), the curriculum developed by HHMI focuses on the collection, isolation, and analysis of bacteriophages.

Bacteriophages, also called phages, are viruses that infect bacteria. They are abundantly present in the environment, both in soil and water, and are a highly diverse. This makes them an ideal subject for undergraduate research; every phage is a new discovery and its identification is a genuine contribution to the biological sciences.

According to HHMI Program Officer Dr. Viknesh Sivanathan, however, the larger goal of the SEA-PHAGES program is to enrich undergraduate education. Applying research methods to the isolation and analysis of phages allows lower division college students “the opportunity to engage in authentic research early in their academic career,” he said. “Not many students have the opportunity to do so, as most mentored research is typically offered to a small number of students.”

SEA-PHAGES has been adopted by over one hundred institutions across the country, from community colleges to Research I universities, and has served more than 4,000 students to date.

And now, thanks to a new partnership between the Howard Hughes Medical Institute and the National Science Foundation, the SEA-PHAGES project is now welcoming its first three tribal colleges. Beginning in 2017, the program will be adopted by United Tribes Technical College in Bismarck, North Dakota, Northwest Indian College in Bellingham, Washington, and Aaniiih Nakoda College, in Harlem, Montana.

The HHMI-NSF partnership provides the support needed for tribal college participation, Sivanathan said. While HHMI provides the curriculum, faculty training, and funds needed to support student participation in an annual conference, it does not provide any direct funding to colleges for equipment and other institutional expenses.

The National Science Foundation, through its TCUP program, fills this gap. Every tribal college accepted into the SEA PHAGES program is eligible for funding needed to purchase necessary equipment, such as incubators.

SEA-PHAGES can be molded to the needs of each college or university. Some institutions create new courses based on the SEA-PHAGES model; others revamp existing introductory biology courses. Both strategies are appropriate, Sivanathan said, but he stressed that the program is primarily intended for freshmen. Bringing research to a large number of students during the first year of study is the program’s guiding vision.

Through this model, students take part in each step of the research process. They collect soil, work to extract the virus, purify it, and extract the DNA. Students have the honor of naming their own phage, and there are opportunities to publish findings in research journals.

Faculty are offered training by HHMI in preparation for teaching and, Sivanathan stressed, need not be microbiologists to successfully oversee a course based on the SEA PHAGE concept. Instructors are are provided training and are also offered peer support. “There is a real sense of community,” Sivanathan said. “Faculty support other faculty.”

Early evidence suggests that the approach helps offer a richer academic experience. Compared with students enrolled in traditional introductory biology courses, students participating in courses based on the SEA PHAGES model have better outcomes, based on grades, retention, and expressed satisfaction. Higher levels of faculty engagement might contribute to these outcomes.

While some worry that learning biology through the focused study of phages is limiting, Sivanathan said students still learn all of the core concepts taught in introductory courses through their course lectures and readings. Research work, as a replacement for the traditional “labs”, provides a richer hands-on experience that makes the study of biological concepts more interesting and relevant.

Interested colleges and universities are accepted into the SEA-PHAGES program through an application process, which primarily evaluates an institution’s capacity to support and sustain the project. In the past, Sivanathan said, tribal colleges might not have had the resources required for participation. However, the NSF partnership removes this obstacle. Once accepted by HHMI, an eligible Native-serving institution can apply for funding needed for implementation from the federal agency.

There is no set limit on the number of participating institutions.