Students and staff at Sisseton Wahpeton College in South Dakota have re-seeded 100 acres of farmland, restoring a lost prairie. 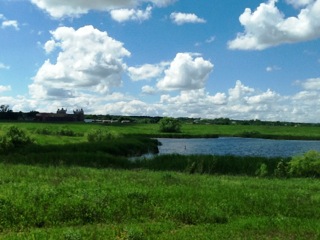 A sea of green grasses swayed across the northern plains 200 years ago. They created a dry, land-locked ocean, filled with bison instead of whales, birds in place of fish.

With European settlement, much of North America’s grasslands were lost by the middle of the twentieth century, largely due to extensive farming. Of the more than 170 million acres of tallgrass prairie that once covered the plains, less than 4 percent remains, according to the National Park Service.

However, Sisseton Wahpeton College in Sisseton, South Dakota is working to bring it back. The tribal college, located in northeastern South Dakota, seeded a 100-acre parcel located behind college’s rural campus in 2009, converting it from farmland after two years of planning. Eight years later, college employees and students work together to eliminate non-native species and restore the prairie grasses, flowers, and shrubs that once occupied the area.

“We wanted to create an outdoor classroom, where we could take students to learn, do research projects, and teach the community about the prairie and different plants—medicinal, cooking, traditional uses,” said Science and Extension Coordinator Dr. Richard (Rick) DeLoughrey.

In the years since the college initiated the Prairie Restoration Project, students have identified between 60 and 70 native species growing in the area. Their log includes:

A grant from the United States Department of Agriculture primarily funds the project. The Sisseton-Wahpeton Sioux tribe donated additional land. That land runs along a main highway, and sits across the street from businesses, a housing development, and tribal administration.

The prairie’s close proximity to the community makes it easy for residents to stay actively involved in its development. People driving past see the prairie’s tall grasses, and youth venture down the half-mile walking paths after school and during the summer, checking out the growth and the pond where cattails and willows grow. Elders also make the trek into the prairie via a paved path and golf cart.

Students meet weekly with elders in the community to name the plants in the local Dakota language. They record a digital file to match with each plan, and are pooling the information to share with the community in the future.

Looking to the future, DeLoughery said the college would like to hold workshops to teach the public about the prairie. Part of that education will focus on identifying the differences between prairie that animals have grazed and that which has remained untouched.

“The prairie was originally grazed by animals, and that helped its diversity, too,” DeLoughery said. He cited bison as an example, explaining that the weight behind their hooves helped to disturb the surface of the ground and push seeds further into the soil.

However, because bison are wild animals, the college is instead planning to graze the prairie with domesticated cattle or sheep. “Due to the proximity of children and other people, it’s not necessarily safe [to use bison],” DeLoughery said.

In preparation for making the jump to larger grazing animals, the college recently acquired three goats, which consume much of the weed and non-native species growth, leaving the grasses alone. Prairie grasses tend to grow slowly and establish deep roots, DeLoughery said, so it takes time to prepare the land for large animal grazing.

Pocket gophers have started to build their homes in the prairie, pushing up soil into tiny mounds that make walking a challenge. “This was a farmed field, so they couldn’t live here before,” DeLoughery said.

While studies have yet to document the animal and insect populations of the prairie restoration, DeLoughery said that research likely isn’t far off. “If we can, we’ll hire students to do some of those studies—lay out 100-foot tape measures to identify species at each foot mark.”

Every couple of years, researchers will return to those measures to record how the species have evolved and changed over time. With continued effort and engagement, Sisseton’s future may look more like its past—a sea of green grasses in the middle of the plains.

Katie Scarlett Brandt is a freelance writer based in Chicago.

Biden signals support for major expansion of the National Science Foundation.  President Biden is expressing support for revised legislation that would dramatically increase the agency’s overall budget, with the lion’s share of funding going to a  new technology directorate. Proponents say the legislation will make the United State more competitive globally, though some in academe worry that prioritization of technology will shift the focus away from basic research and other disciplines. [AAAS/Science]

Yurok Tribe helping to reintroduce endangered California condors. In a partnership with federal agencies, the California tribe will take part in the reintroduction of an “experimental” population of condors in Northern California, bringing six birds per year for the next twenty years to a region that encompasses Redwood National Park and Yurok ancestral lands. There are only an estimated 300 California condors in the wild, up from 23 in 1982, when a captive breeding program was established to prevent extinction. [Jefferson Public Radio]

Dr. Gregory Cajete to speak on “Creating Culturally-Responsive Indigenous Science Education Curriculum” at Waasamoog, a virtual conference examining the challenges and barriers to online and distance education at tribal colleges and other minority-serving institutions. Hosted by Leech Lake Tribal College, the event, to be held April 14-15, 2021, is free and open to all. Abstracts for oral or poster presentations are invited, with a submission deadline of April 1.

The 2021 TCUP Research Symposium, originally scheduled for May 19-20, 2021, has been postponed, due to concerns over the safety and feasibility of travel. Hosted by the Tribal Nations Research Group in partnership with the National Science Foundation, the annual event showcases research conducted by tribal college faculty and students. New dates for the event, which will be held in-person at  the NSF in Alexandria, VA, will be announced later, though organizers are tentatively offering a late September to early October 2021 window. In the meantime, the submission period for abstracts has been reopened. For more information: http://www.tnrg.org/nsf-symposium.html

Nominations sought for AISES Professional Awards. The American Indian Science and Engineering Society (AISES) is now accepting applications for its 2021 Professional Awards program, which recognizes outstanding Indigenous professionals in STEM and related disciplines while assisting with the advancement of Indigenous professionals, role models, and future leaders. Applications are due by May 21, 2021 at 11:59 pm MDT. Click link above for more information and online application.

2021 Shifting Seasons Summit: Sharing Adaptation and Resilience Knowledge ​Across Indigenous Communities, April 19-21, 2021, with a special Earth Day event on April 22. Hosted by the Northeast Indigenous Climate Resilience Network at College of Menominee Nation, the third annual summit will offer climate adaptation training sessions tailored to the needs and capabilities of tribes, as well as discussion of tribal climate change initiatives developed outside of the northeast by capacity-building organizations, academic institutions and tribes. Registration closes April 1. Submissions for a virtual student poster session are invited, with a deadline of March 26.

Iḷisaġvik College faculty member Linda Nicholas-Figueroa named 2020 AAAS Fellow. Nicholas-Figueroa was honored by the prestigious American Association for the Advancement of Science for “20 years of excellence in teaching and mentoring Native Alaskan students and for her scholarship on culturally sensitive and place-based approaches to learning science,” according to an AAAS announcement. [AAAS]

Getting Yellowstone bison out of quarantine and onto reservations. Two bills introduced into the Montana legislature would allow tribes in the state to more easily establish and expand their own herds of wild buffalo. Opponents continue to argue that faster relocation of bison from Yellowstone National Park quarantine facilities risks spread of brucellosis. [Montana Free Press]