Tim Grosser ends a decade of service to tribal colleges 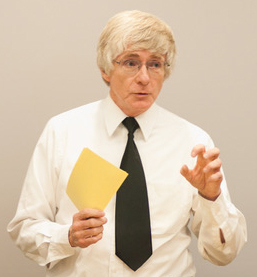 As a Peace Corps volunteer in Ghana in the early 1990s, Tim Grosser learned key lessons that would follow him throughout his career: how to do without and how to rely on others. Those lessons came to life most starkly when a combination of malaria and dysentery ate away at Grosser’s 5 foot 10 inch frame, whittling him down to 125 pounds. With nothing but the people directly around him, he had to rely on them to carry him to the hospital, where Grosser was certain he would die.

“Once you’re at that place, you can then do anything,” he said, roughly 25 years later. Grosser called his two years in Ghana, where he taught agriculture, some of the best of his life. His time there formed his outlook on how the rest of the world lives and how to get things done.

“You have to make stuff up, find ways to get things done that aren’t going to get done unless you do them. That get-it-done attitude has served me well,” he said. “You also have to build relationships. You don’t survive otherwise.”

Grosser made it out of the hospital and when his two years were up, flew home to the United States. He went on to earn a master’s degree, and, following graduate school, returned to the Peace Corps—this time as an employee.

That work landed Grosser in Washington D.C., and eventually at the United States Department of Agriculture (USDA) where he oversaw grants and programs that support agriculture and related research at tribal colleges. This past April, well respected and liked by his colleagues at the tribal colleges, he retired with 33 years of government service.

“Not a thing was planned in my entire career,” Grosser said. “Sometimes, if you plan to get somewhere, that’s where you go. If you’re open, you never know where you’re going to wind up, but for me, everything has worked out.”

Responding to the People’s Needs

Grosser started at the USDA working in international programs. He traveled to the former Soviet Union to set up extension services and market development. In 2006, back in the U.S., he shifted gears to work with the tribal colleges, known as the “1994s” because of the year they became land grant institutions with active involvement from the USDA.

“I was fortunate to be assigned to the tribal college programs. I’ve learned a great deal and have come to appreciate our shared and tragic history when it comes to Indian Country. Providing resources that assist American Indians (as they) work through historical trauma and towards Indian sovereignty is a responsibility that I have come to appreciate and to approach with humility,” Grosser said.

Grosser never had a “typical” day, though he clearly spent a great deal of time on the phone. He estimated that he received about 6,000 calls and emails annually from tribal college presidents and grant program managers. He used competitive grant and formula programs to connect the 34 colleges eligible for funding with roughly $20 million for education, research, and extension-focused programs.

“Working with and for the good people in Indian country (was) my focus. When you are responsive to people and their needs, provide good counsel on federal resources and on-the-ground programming, folks are appreciative. You know that what you do matters in their daily lives. This is its own reward and keeps my jazzed,” Grosser said.

He learned that no matter how good the work made him feel, it was ultimately not about him. “I have no answers,” he said. “I can only assist where it is appropriate. American Indians are empowering themselves, and these programs are designed—in keeping with the land grant philosophy of applying knowledge to help solve local problems and address local needs—to do just that.”

Grosser said he has seen the power in linking Native Americans’ education to their culture. “It’s a way to heal what has been destroyed,” he said. “The USDA was the people’s department. We provide these resources because it’s theirs. They’re the ones who do the work.”

He added, “What’s right for Indian Country? In order for something to be sustainable, they need to get their hands on it and do it themselves. My work in this agency was to help people understand that.”

The programs that Grosser helped fund through the USDA relate to agriculture and include research and education around everything from traditional foods to child nurturing.

“It’s not just sows and plows or food production. There’s entrepreneurship, how to make money from farms, from crafts. Agriculture is a way of life in the rural areas, and if you have healthy rural areas, you’ll have healthy families,” Grosser said.

During his time at the USDA, Grosser traveled to one-third of the tribal colleges and met many of his colleagues at conferences in Washington D.C. Time and again, he noted their dedication to helping their communities. “People in Indian Country tend to be really dedicated to the cause. The prospect of doing even greater things is there. These are people who are so good, it gives you goosebumps.”

A life-long learner, Grosser now is going to use what he has learned over the past decade and apply it to his next phase. He is taking courses in poetry and photography at a local community college and is considering becoming an end-of-life doula.

“There’s a need there for someone to listen, for someone to be there,” he said. Grosser knows this from his personal life, but will use skills that he honed during his years working with and responding to the tribal colleges.

“That’s where I’m being called to go,” he said, explaining that he lost both of his parents within four days of each other. The experience brought him face-to-face with the essence of life and the process of internalizing such a major transition.

Leading up to his retirement, Grosser spent nine months working with Erin Riley, who has taken over his role. With a master’s degree in Range Management, Riley had previously used one of the USDA’s research grants in her own work and brings firsthand experience from working with a tribal college in New Mexico.

“I could stay and still be useful, but a younger person needed to come in and think about what the next five to 10 years look like—the types of resources for community development and what happens next for the 1994s,” Grosser said.

At least for now, Grosser is making a clean break from his role and the tribal college community. “You have to be able to let go of something that you’ve done so intensely for 11 years. Let it go the way it’s going to go. Let some time pass.”

Grosser added that he’s never had a plan, “and that’s my method. I’m going to take the jump and see what happens. This is the only time I have left, so I’m going to go see what’s out there.”

David Gipp, long serving president of United Tribes Technical College, dies at 74. A member of the Standing Rock Tribe, Gipp was the first executive director of the American Indian Higher Education Consortium in the early 1970s. He then served as president of United Tribes Technical College in Bismarck, ND for 38 years, guiding its growth from a vocational training center into an accredited, STEM-focused institution that now enrolls students from more than 75 federally recognized tribes. Native Science Report mourns the passing of a tireless leader.

NSF seeks input on strategic plan. The National Science Foundation is soliciting input related to the implementation of the Federal STEM Education Strategic Plan, Charting a Course For Success: America’s Strategy for STEM Education. Institutions and individuals are invited to address one or more of the plan’s identified funding and policy priorities. Information gathered from this request may be used to guide future Federal STEM education resource development. Interested persons are invited to submit comments by October 19, 2020.

Webinar training for NSF-NEH language program grant proposals. A series of webinars will be held for Native American linguists and language practitioners, especially those based at Native American institutions, interested in submitting grant proposals to the joint NSF-NEH Dynamic Linguistic Infrastructure/Documenting Endangered Languages (DLI-DEL) program. Five weekly sessions, beginning September 8, will include discussions with tribal citizens, linguists and indigenous linguists with experience preparing, reviewing, and managing these awards. Recordings of the presentations and panel discussions will be posted after the series is complete.  Click link above to register. For solicitation and due dates: https://www.nsf.gov/pubs/2020/nsf20603/nsf20603.htm

Tribal college community mourns the passing of Sherri McDonald. Married to Joe McDonald, the founding and long-serving president of Salish Kootenai College, Sherri is remembered for her “warmth, compassion, and deep concern for others,”  writes Native Science Report Editor Paul Boyer in a testimonial published in the Tribal College Journal. [TCJ]

Dr. Jeremy Guinn to serve as NSF-TCUP  program officer. The National Science Foundation announced that Dr. Jeremy Guinn will serve as program officer for the Tribal Colleges and Universities Program (TCUP) and the Education Core Research (ECR) program. Program Officers/Directors are responsible for managing funding programs and working with awardees throughout the life of the award.  This position will allow Guinn, who previously served on the faculty at United Tribes Technical College, to work closely with tribal college STEM leaders, learn processes and opportunities at the NSF, and help strengthen TCUP programs for tribal communities.

Major expansion of National Science Foundation proposed. Bills introduced into both houses of Congress would create a new technology directorate within the NSF and provide an additional $100 billion in funding over five years. The proposal appears to have bipartisan support, but is receiving a mixed response from science leaders. Increased funding for the agency–which would be renamed the National Science and Technology Foundation–is welcomed, but some worry that it would shift the agency’s focus away from basic research. [Science/AAAS]

NSF’s Documenting Endangered Languages (DEL) program changes names. Run in partnership with the National Endowment for Humanities, the DEL program is now known as the “NSF Dynamic Language Infrastructure – NEH Documenting Endangered Languages (DLI-DEL)” program. The collaboration “supports projects to develop and advance knowledge concerning dynamic language infrastructure in the context of endangered human languages—languages that are both understudied and at risk of falling out of use.” Deadline for submissions is September 15, 2020.