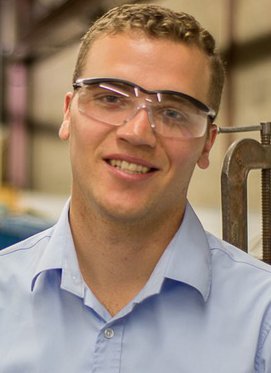 One of the most prestigious awards available to students pursuing STEM degrees is the National Science Foundation’s Graduate Research Fellowship. This highly competitive program, the oldest of its kind, provides three years of financial support to graduate students who “can contribute significantly to research, teaching, and innovations in science and engineering.” Past recipients include Nobel laureates, cabinet secretaries, and noted authors.

Awardees typically come out of the nation’s most selective undergraduate colleges and universities. However, Tyler Fouty—one of this year’s recipients—is a proud graduate of Salish Kootenai College, a tribally controlled college on the Flathead Reservation of Montana. As a member of the college’s faculty, and as Tyler’s undergraduate advisor, I was especially pleased to learn that he was chosen by the NSF. His fellowship will support his current studies at Washington State University, but it was on the Flathead Reservation where his academic interests took root and where, pursuing a degree in hydrology, his talents became clear.

Tyler Fouty was born and raised on the Flathead Indian Reservation, the land of the Salish, Pend d’Oreille and Kootenai Tribes. As an emerging college-bound student, Tyler found success during his time at Polson High School. Polson is located on the northern end of the reservation near the shores of Flathead Lake, the largest fresh water lake west of the Mississippi River. At Polson High School Tyler successfully navigated the often difficult task of balancing scholastic and athletic participation. While he lettered in wrestling, football and track, Tyler also remained on the school’s honor role during all four years of study. These early successes were the foundation of his resilience and success as he moved forward in his educational journey.

Following his graduation from high school in 2010, Tyler worked with his grandfather at S & K Environmental Restoration, a business venture developed by the Confederated Salish and Kootenai Tribes to provide river, wetland, and upland restoration throughout the West. Tyler developed his technical skillset working to restore stream features in accordance with environmental plans and specifications. During this time Tyler felt a pull toward environmental work, which guided him to begin his post-secondary educational career.

He first enrolled at Southern Oregon University and then Montana State University-Billings, but eventually transferred to Salish Kootenai College where he joined the third cohort in the newly accredited hydrology program. Along with his enrollment at SKC, Tyler also showed his persistence and ability through his acceptance into the Doris Duke Conservation Scholars Program at the University of Washington. This multi-summer, undergraduate experiential learning program allowed Tyler to further his growth academically and technically through participation in this intensive conservation skills and leadership driven program.

During the next two summer Tyler worked alongside the university’s Quinault Department of Natural Resources. Here, Tyler assisted in the removal of stream barriers while classifying other impediments to natural fish passage. Prior to this work Tyler completed an associate of science in hydrology while concurrently volunteering as a coach for the Polson High School track team. These accomplishments further exemplified his humble and inquisitive nature, culminating in an easy-going attitude that allowed him to take full advantage of his educational experience.

After completing his associate degree, Tyler continued at SKC to pursue his bachelor’s degree in hydrology. During this time Tyler also engaged in a number of undergraduate research experiences. Tyler found himself traveling to the Las Cruces Biological Station in Southern Costa Rica as part of an international research experience. Here, Tyler investigated the water quality of streams using aquatic invertebrates as an indicator. Through funding provided by NSF at the University of Minnesota, Tyler worked with the St. Anthony Falls Laboratory, an interdisciplinary fluids research and educational hub. Here, he investigated how scaling of flumes changed entrainment in debris flows. Funding from the American Indian College Fund provided further support to continue his research in debris flow, allowing Tyler to integrate his experiments with advanced computational tools and theory.

Following a successful two years of research and course work, Tyler completed his bachelor’s degree in hydrology. Through his own determination and desire to further his education Tyler applied to and was accepted at Washington State University’s civil engineering program in Pullman, Washington. WSU actively recruited Tyler, leveraging his academic achievements to offer funding for his first year through a research assistantship provided by the Diverse Scholars program through the Civil Engineering Department, the Plateau Center for Native American Studies, and the graduate school.

Currently, Tyler is studying streambed factors that contribute to fish passage in culverts in the Albrook Hydraulics Lab. His work entails creating complex simulation of streambeds with culverts. This provides an understanding of enclosed drainage structure design while considering streambed factors that allow prolonged habitat and passage of fish to spawning grounds for the Washington Department of Transportation.

Through his successes and maturation Tyler has shown that a passion and commitment toward a goal are achievable. His composed demeaner and personability helped him navigate the often complex transition from a small rural reservation town to a prosperous graduate educational experience. His time at Salish Kootenai College provided further evidence of his ability to make the most of the unique local educational experience that tribal colleges can provide.

Shandin Pete is an instructor at Salish Kootenai College in Pablo, Montana.

NSF seeking ideas for future Convergence Accelerator research topics. The National Science Foundation’s Convergence Accelerator program is “designed to transition basic research and discovery into practice.”  In a January 20 webinar, The NSF will explain how the Convergence Accelerator’s “ideation process is your opportunity to think big to address current and future national and societal challenges. This enables participants to shape their topic ideas around the NSF’s criteria and will help guide their experience in the ideation phase of the program.” The NSF encourages researchers and innovators from academia, industry, nonprofit, government, and other communities of practice to attend this webinar and submit ideas for consideration. More information about the program can be found in a Dear Colleague Letter. Register for the webinar through the link above.

The QEM Network will host proposal development workshops focused on the NSF Robert Noyce Teacher Scholarship program, which provides funding for “recruiting, preparing, and retaining highly effective elementary and secondary mathematics and science teachers and teacher leaders in high-need school districts.” The workshops are open to all faculty at minority-serving institutions who are seriously interested in submitting proposals. QEM will conduct two virtual workshops on February 10 and 11, 2021 from 1:00-5:00pm EST. The registration deadline is Friday, January 21. Submission of a one-page summary by Friday, January 28 is required to be considered for the workshops. The registration for can be found here. The summary submission form is here. Program synopsis and guidelines are in the link above.

NSF Dear Colleague Letter highlights funding opportunities for Critical Zone research. The National Science Foundation is inviting proposals that “expand the breadth of researchers investigating the dynamics and processes within Earth’s Critical Zone (CZ), the region that ranges from the weathered bedrock beneath the soil profile up to the top of the vegetation canopy.” NSF currently supports research through several Thematic Clusters as part of the Critical-Zone Collaborative Network (CZNet; NSF 19-586). The December 7 DCL encourages submission of proposals from minority-serving institutions and early-career researchers who are not currently part of CZNet.

2022 QEM/NSF Talent Development and Innovation Sciences (TDIS) Summer Internship. The Quality Education for Minorities (QEM) Network is inviting applications for its 2022 virtual summer internship. Students will have an opportunity to be mentored by program officers at the National Science Foundation who are involved in making science policy and in implementing national programs focused on STEM. The experience is designed to increase understanding of how science policy is made and broaden participation in STEM by students from underrepresented minority groups. The internship will provide $6,000 (undergraduate) and $7,000 (graduate) stipend. The application deadline is February 25, 2022.

NSF announces funding for projects investigating “ethical and responsible research.” Ethical and Responsible Research (ER2) research projects “use fundamental research to produce knowledge about what constitutes or promotes responsible or irresponsible conduct of research and why, as well as how to best instill responsible conduct of research into researchers, practitioners, and educators at all career stages.” Proposals from or involving substantial collaboration with minority-serving institutions are strongly encouraged. Full proposal deadline is February 17, 2022.

NSF announces new postdoctoral research fellowships. The STEM Education Postdoctoral Research Fellowships program funds individual and institutional postdoctoral awards “designed to enhance the research knowledge, skills, and practices of recent doctoral graduates in STEM, STEM education, education, and related disciplines,” with an emphasis on broadening participation in the field. Proposals are due by March 1, 2022. Additional information regarding eligibility can be found in the program solicitation.

NSF announces support for tribal colleges facing enrollment declines. The NSF Tribal Colleges and Universities Program (TCUP) is inviting proposals from TCUP-eligible institutions experiencing a pandemic-induced decline in enrollment “for activities deemed essential to mitigate against the impact of the pandemic on student achievement in STEM courses or programs of study.” Funding will reimburse institutions for salary of a STEM faculty member, with a limited amount of funding also available for STEM program costs. Proposals will be accepted through January 31, 2022. Additional information can be found in this June 14 Dear Colleague Letter.